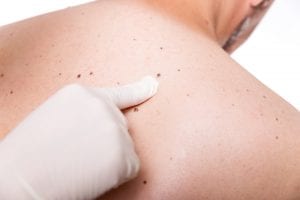 Moles are small collections of the normal skin pigment cells called melanocytes. Normally the melanocytes are evenly distributed throughout the skin, but moles are formed when several of the melanocytes are grouped together. Sometimes they are present at birth, but usually they develop as we age. Most people acquire the majority of their moles by the age of 40 and it is rarer to develop new moles after this age. Most moles are brown in colour, ranging from light brown to deeper brown or almost black, but some moles, particularly on the face, are flesh-coloured. They can either be flat or raised.

Harmless (benign) moles are very common and most people have at least one or two moles.

For additional information about moles and mole removal options, we invite you to explore the sections below and/or contact us today to book an appointment at Dermatology Consulting.

Most moles are completely harmless (benign). Occasionally however some of the pigment cells (melanocytes) in the moles can turn cancerous and develop into a form of skin cancer called melanoma. Melanoma, like most cancers, can be life-threatening, but if it is caught early and removed, can be cured. However melanoma can also occur as a new development even in normal looking skin so any new brown mark that develops should be checked by a doctor, particularly if it continues to change in shape, outline and pigmentation pattern.

What are the signs a mole is cancerous?

Signs that a mole may be developing into a melanoma are changes in size, shape, colour (including loss of colour) or the pattern of pigmentation. Bleeding and itching for no obvious cause, or a white halo developing around the mole can also suggest a change in the mole.

Melanomas, in fact, can develop not only within moles, but in normal skin, so any new brown spot or lump that develops and shows signs of changing should be assessed.

What should be done if a mole is thought to be changing?

If you are concerned about changes in a mole you should seek the advice of a dermatologist or your general practitioner who can refer you to a dermatologist if he/she feels it is appropriate. The dermatologist will examine the mole, sometimes under an ordinary magnifying light, and sometimes using a special magnifying light called a dermatoscope which uses polarised light to show some of the pigment pattern under the skin. If the mole does not show any unusual worrying features it can simply be watched. Photographs can be helpful in monitoring of the mole. If the dermatologist is concerned that there is a possibility that the mole may be a melanoma it is best removed by a simple minor operation under a local anaesthetic and sent for analysis.

What is mole mapping?

Mole mapping is a photography or video system documenting the position and appearance of moles. It allows photographs to be taken of the body showing the position of the moles. Following this, close-up photographic images of the appearance of the most unusual moles are taken using a special magnifying light (dermatoscope image). Dermatoscope images are the result of a polarised light shone on to skin and reflected back, which reveals some additional structures and pigment patterns under the skin that are not visible with normal light. These dermatoscope images can be mapped onto the appropriate sites on the body photographs. These photographs then provide a baseline for follow up of the moles to check that they are not changing.

The role of mole mapping is to provide a baseline image that can be used for future monitoring of the moles. After the photographs are taken, it is suggested that a follow-up visit occurs three months later to compare the moles with the photographs to check the moles are stable. Following that, a plan for future follow up visits can be made if appropriate.

What treatments can be used to remove moles?

The majority of moles are completely harmless. However, if there is concern that a mole has become cancerous it should be excised with at least a 2mm margin and with full thickness of the skin to remove the mole entirely and allow it to be checked down the microscope completely. The excision is generally done in the shape of an ellipse, typically three times longer than the width. The edges are closed together to form a linear scar usually using two layers of stitches (one deep layer which dissolves and one superficial layer which needs to be removed after 10-15 days). This leaves a linear scar which may stretch with time, but can be improved and faded by gentle scar reduction laser treatments such as Pulse Dye Laser and Fraxel® laser. It does not matter how old the scar is—it can be faded with laser but, the earlier the laser treatment is performed, the fewer sessions of Fraxel® laser are usually needed. We do a package of Pulse Dye Laser and Fraxel® laser after mole removal which starts at £95 per Fraxel® session for small scars.

If a mole is harmless but you do not like the appearance of the mole or it is catching and becoming irritated, it can be easily removed. If it is a flat mole, then it can be removed by the excision method mentioned above to remove all the mole, including its pigmentation, completely. This will leave a linear scar which may fade with time but can be faded further with Pulse Dye Laser and/or Fraxel® laser as mentioned above. If it is a harmless raised mole, then another method that can be used is to have the mole flattened down (called a shave excision). The aim is to remove the bulk of the mole to achieve a flat base. This can be performed easily under a local anaesthetic. After the mole is flattened down the base is gently heated with cautery to stop bleeding, leave a flat scab and to reduce the remains of the mole. Usually the site that has been treated by shave excision forms a light crust which will then scab over and flake off in a week or two. A small dressing can be applied for the first couple of days.

The area sometimes heals leaving a flat, pink mark that fades with time, but often there may be a small residual pink or pale mark that is either slightly raised or slightly indented. There is also a chance the mole may re-grow. Also, if the mole is heavily pigmented, there is quite a strong chance that the pigment may come back again within the mark. If the mole removed by shave excision does regrow, it can be shaved again. If it develops pigmentation in it, then it can be excised fully to form a linear scar with an elliptical excision as outlined above. The moles that tend to heal after shaving with the best cosmetic result are raised moles with very little pigmentation in them.

What is the difference between a mole and a skin tag?

A mole is caused by a collection of melanocytes, which are the skin’s pigment producing cells. Moles can be flat or raised, pigmented or flesh coloured. If they are raised they usually have a broad base. They can occur on any site of the body. They can be removed by the methods mentioned above (i.e. shave excision or elliptical excision).

Skin tags (also called acrochordons) are protrusions of normal skin attached to the underlying skin by a narrow stem or stalk. They are usually flesh coloured. While they can occur on any site of the body, they most frequently occur at sites of friction such as around the neck, armpits and groin. Skin tags are not dangerous but can catch and irritate. Skin tags usually start around middle age. They can be removed by snipping followed by cautery of the base, cautery alone, freezing (cryotherapy) or laser ablation. Often a combination of these methods can be used.