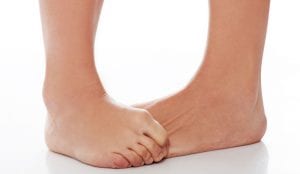 Abnormal, thickened nails are a frequently encountered problem and can be a source of self-consciousness and embarrassment. They are often caused by fungal infections, although sometimes they are due to a hereditary tendency, inflammatory skin conditions (such as lichen planus and psoriasis) or trauma.

How is the diagnosis made?

A dermatologist can determine the correct diagnosis by putting the clinical details into context and checking the rest of skin for clues that could indicate that the nail problem is due to inflammatory skin conditions such as psoriasis and lichen planus. Fungal infections can be diagnosed by taking samples for analysis by microscopy and culture in a laboratory.

Fungal nail infection is a frequently seen problem. In some parts of the world the majority of the adult population has fungal nail infection. It usually starts after the nail is damaged and fungal spores enter the keratin/protein of the nail. Fungal spores can be encountered in the environment such as changing rooms and old shoes. Often there can be athletes foot infection between the toe web spaces which is the first site of fungal infection. The fungus grows slowly in the keratin/protein of the nail and causes the nail to become thicker, discoloured and hardened. The nail may so hard that it proves difficult to cut or can be “crumbling” in texture when one tries to cut it.

What treatments are available?

In the case of inflammatory skin conditions, once the correct diagnosis has been made, then prescription products can be used.

The standard treatment for fungal nail infection is antifungal tablets. The longest established one is griseofulvin, which is not used often as it usually needs to be prescribed for a year in adult nails. The tablet which is used most often is Terbinafine (Lamisil). This is taken once a day until the new nail which is growing out looks clear of fungus. In adults this is usually requires four or five months. However not all adult nail fungal infections are cured by oral tablets. The success rate with oral Terbinafine can be improved with adding a topical lotion/cream but even then it is rarely a 100% cure.

The oral tablets have been used for a number of years and many patients have no problems but some patients do experience side effects. Such side effects include rashes, altered sensation of taste and liver problems. For this reason liver function blood tests have to be done before starting the tablets and every few weeks while taking the tablets to monitor the liver. If there is a pre-existing liver problem, or if certain other medications are being taken, then it may not be safe to prescribe Terbinafine.

What about Laser treatment?

Because of the possible side effects of antifungal tablets there has been increasing interest in using lasers instead. The laser is used to gently heat the affected nail and, in doing so, the hope is that it heats and kills the fungus. The laser which has among the most data for use in the treatment of fungus is the long pulse Nd:YAG. We have two different long pulse Ng Yag lasers available for the treatment of fungal nail infection. The one we use most frequently is the Lasergenesis: long pulse NdYag (also called Excel V) made by a company called Cutera. This is FDA approved in the USA and Canada for temporary increase in clear nail growth in fungal nail infection. The increase is temporary in that once the nails appear to be clear the laser treatment needs to be repeated every two to three months to maintain the appearance of clear nails.

Another option is to drill holes into the nail plate using an ablative fractionated laser and then apply an anti-fungal preparation to the nail for several months afterward until the infected nail grows out.

What does laser treatment of fungal nail infection involve?

The NdYag laser uses a beam of 8mm diameter which is passed gently over the nail surface to heat it. The laser beam heats up the fungus but leaves the surrounding nail undisturbed and does not damage the background or normal nail.

The fractionated ablative laser option drills small holes through the full thickness of the nail plate which is a single relatively quick procedure. The patient then applies the anti-fungal lotion to the nail daily so that it runs through the holes. These holes grow out as the nail grows out.

If the long pulse NdYag option is used, the nail looks completely normal afterwards. If the fractionated ablative laser option is used, it creates small holes in the nail plate which grow out as the nail grows out.

What special precautions should be taken afterwards?

It is advised that patients bring a fresh pair of socks/footwear to wear after the procedure. Otherwise no special precautions are needed immediately after the treatment. In order to reduce the chance of re-infection it is important that the nails and surrounding skin are treated with regular applications of antifungal cream and alcohol gel afterwards and that shoes should also be disinfected.

How many treatments are needed?

If the long pulse NdYag is used it is recommended that the treatment is done monthly for three months and then as a maintenance every three months.

In the case of the fractionated ablative laser one treatment may be sufficient but the antifungal lotion needs to be applied until the nail grows out.