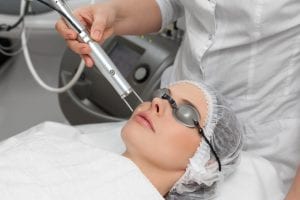 It has now been well demonstrated that regular, repeated, and gentle sessions of intense pulsed light over the years can result in the skin looking younger many years later. This is considered to be due to the stimulation of collagen, and it has been shown that regular treatments with IPL can cause the skin to express the same genes as much younger skin.

What is Intense Pulsed Light (IPL) and how does it differ from laser?

Intense pulsed light (IPL) is a technology that filters visible light to select certain colours, or wavelengths, of light for skin treatment. This means that IPL offers several colours (wavelengths), in contrast to lasers which only have one very specific colour (wavelength). The original IPLs that were built in the 1990s were developed as a cheaper alternative to lasers for practitioners who could not afford the more powerful and specific lasers. As the colour filters allowed several colours, this meant that one machine could be used to treat several different problems (e.g. red blood vessels, pigmentation, and unwanted hair) rather than having to buy a separate expensive laser for each problem. On the other hand, having several colours could also be a disadvantage, as it meant the IPLs had a higher risk of heating structures which were not the intended target (e.g. heating the normal pigment in the surface of the skin, causing a burn). Also, the earliest IPL machines were not very powerful and produced only mild results compared to lasers.

However, over the last couple of decades, the engineering behind some IPL companies has improved significantly and there are now certain brands making more powerful IPLs with more selective filters.

What system of IPL is used at Dermatology Consulting?

Our dermatologist uses the Lumecca™ IPL, which is one of the latest IPLs and which has significantly more power and more specific colour filters than many other IPLs. It is at least three times more powerful for the wavelengths that treat red and brown pigment than many other brands of IPLs.

Two advantages of the Lumecca™ system are that it treats both red and brown spots at the same time and it covers large areas quickly.

Are there any special precautions to take beforehand?

It is important not to have a tan or fake tan before the treatment. If you are prone to the cold sore virus, it is often helpful to take an antiviral tablet beforehand and for five to seven days afterwards to prevent a cold sore flare up.

What does a photofacial/Intense Pulsed Light treatment involve?

Makeup is removed and a soothing ultrasound gel will be applied to the face. Protective goggles are worn to prevent the IPL flashes from going into the eyes. It is very important not to have a tan while receiving IPL treatment, as the IPL will also heat up the tanned skin. The IPL has a cool sapphire tip which is designed to cool and to protect the skin from overheating. Many patients describe the sensation of IPL treatment as a gentle flash of mild heat against the skin. The cool tip is moved steadily across the area to be treated to cover it evenly. Treatment of a full face takes approximately 10-15 minutes.

How does the skin look afterwards?

After treatment the skin looks slightly flushed, and this effect usually lasts about 10-30 minutes. Brown spots look slightly darker and form mild crusts which flake off over a few days, so lifting off the brown pigment. You can apply makeup immediately, if desired, and continue with your daily activities.

Are there any special precautions afterwards?

You can wash, swim, and continue your daily activities normally. However, it is recommended not to develop a tan in the couple of weeks after the treatment.

How often can the treatment be performed? 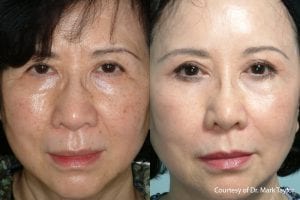 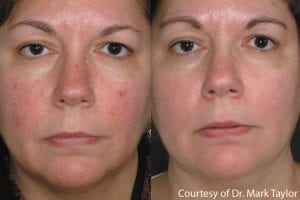 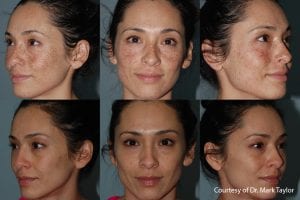