What are the benefits of treatment with Fraxel® Re:store with Dual Wavelengths (1550nm and 1927nm)?

What is Fraxel® Re:store with Dual Wavelengths?

Fraxel® is an exciting technology which was patented at Harvard University in 2003. Fraxel® lasers use microscopically small beams of laser energy to precisely treat small sections of 15-50% of skin at a time. These “islands” of treated skin stimulate the body’s own natural healing process to replace the old, damaged skin cells and collagen with rejuvenated, fresh, healthy-looking skin.

The original Fraxel® Re:store laser (which uses the erbium glass wavelength/1550nm wavelength laser) is non-ablative, i.e. it does not break the surface of the skin. Therefore it has a shorter recovery time, and makeup can be applied immediately afterwards. Patients typically see an improvement after one treatment, but most patients choose to have three to six sessions for maximum results. Fraxel® Re:store removes both pigment and old collagen, so it also helps rejuvenate skin texture, reduce wrinkles, tighten pores, and soften scars, as well as remove unwanted pigment. After treatment, the skin may be red and slightly swollen; there is usually slight flaking of the skin a couple of days later. As the skin is not broken, clients are usually able to return to work the same day and are able to wash and wear makeup as usual. To enhance patient comfort, the treatment is performed using local anaesthetic cream. Because the Fraxel® treatment is so precise, it is considered to be safe and effective even on delicate parts of the body such as the neck, chest, hands, arms, and face. It can also be used on skin of virtually all colours and types (from very fair to very dark).

Fraxel® Re:store with Dual wavelengths is a new addition to the Fraxel® technology line, which was launched in the US in 2009 and in the UK in 2010. In addition to the 1550nm wavelength, it has a second wavelength of laser energy called the thulium wavelength (1927nm). This laser was previously used in other branches of medicine, but only recently has it been developed for use in dermatology. The Thulium 1927nm wavelenghth is particularly good at removing pigment. One session with the Thulium 1927nm wavelength is equivalent to four of the 1550nm wavelength for removing pigment. It is usually performed with local anaesthetic cream, although some patients are able to have large areas treated without local anaesthetic. Afterwards, the skin may be red and slightly swollen and flaky for at least a week. Patients can wash as normal immediately after the treatment and apply makeup. Individuals who receive face treatments may wish to take a couple of days off work while the redness settles. A particularly popular treatment is to have the thulium wavelength treatment first, to remove the unwanted pigment, then follow it up either on the same day or a couple of weeks later with the 1550nm wavelength, to help reduce wrinkles and improve skin texture.

How many treatments will I need and how will they be spaced?

Each person’s skin is unique, but clinical studies suggest that for most patients looking for improved texture and reduction of wrinkles and scars, maximum results can be attained in about three to five treatment sessions using the 1550nm (erbium glass) wavelength. For individuals looking for pigment improvement, the 1927nm (thulium) wavelength can give significant improvement in just one or two sessions. Treatments are usually scheduled every two to six weeks.

A topical anaesthesia cream will usually be applied before beginning the procedure, and paracetamol can be taken. However, some patients are able to tolerate having large areas treated with the 1927nm wavelength without the need for local anaesthetic. During the procedure, cold air applied to the treated area to minimise discomfort. After the treatment is complete, most patients report a feeling similar to having had too much sun. This sensation usually fades after one to three hours.

What side-effects can I expect after treatment and how long will they last?

There will be some degree of redness and swelling, depending on the settings chosen. After a few days there may be some slight peeling and flaking and sometimes a bronzed skin colouration. These effects can last different amounts of time depending on the treatment intensity and your particular healing characteristics.

What precautions should I take after treatment?

Our skilled consultant dermatologist recommends that you wear sunscreen of SPF 30 or higher and that you avoid direct sun exposure while you’re healing, as well as for at least two months after your procedure. You can provide additional protection by wearing wide-brimmed hats if you expect to be outdoors.

How long do the benefits of Fraxel® Re:store with Dual treatment last?

The results can last a long time, but the actual length of time will vary based on how you care for your skin and other factors unique to you. Once the Fraxel treatment has improved your skin you should maintain the improvement with good sun protection and a good skin care programme. For skin conditions such as melasma, it is essential to avoid direct sun exposure to maintain the positive effects.

Dr Farrell was a one of the first dermatologists to use the Fraxel® technology in the UK and she and her team have treated many hundreds of patients with this lasers. To find out more or book a consultation email or phone us. 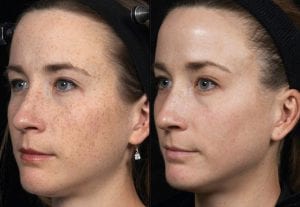 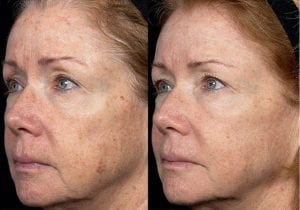 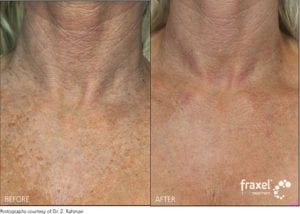 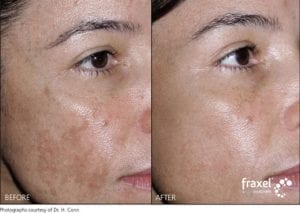